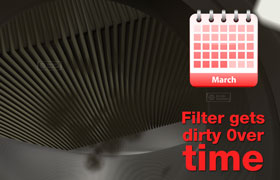 Question:
What’s the harm in putting off replacing my engine air filter a little longer?

Porter Tire & Auto Answer:
That’s a fair question from Olive Hill motorists because the harm takes a while to manifest. Let’s take a small step back and talk about what an engine air filter does.

The air all around us contains dust, dirt, pollen, spores, etc. Some areas and times of the year have more contaminants in the air. The job of the air filter is to keep that stuff out of your engine. The benefit to Olive Hill auto owners is obvious.

Now your engine uses a lot of air – like 12,000 gallons of air for every gallon of fuel – so the engine air filter hasan important job to do. When the filter gets full and can’t hold any more dirt, all that air still has to get to the engine so dirt gets forced through the filter and heads on downstream.

The air flows passed the mass air flow (MAF) sensor on its way to the engine. The MAF sensor tells the engine control computer how much air is coming so the computer can send the proper amount of fuel into the engine to maintain the correct air-to-fuel ratio.

When dirty air is flowing passed the filter, detrimental dirt starts to build up on the delicate MAF sensor elements causing incorrect air flow readings. The computer then sends the wrong amount of fuel to the engine. This can rob power from the engine. But the harm comes from unburned fuel passing out through the exhaust system and getting caught in the catalytic converter leading to costly damage.

A primary cause of catalytic converter failure is improper engine management, often triggered by a dirty MAF sensor which was contaminated because the engine air filter had not been replaced as recommended. Now Olive Hill motorists can buy several cases of engine air filters for what it would cost to replace a catalytic converter. So when it’s time to replace your engine filter keep in mind the potential long term effects of putting it off. Talk to your caring Porter Tire & Auto service advisor.

At Porter Tire & Auto in Olive Hill KY (41164) we install quality NAPA replacement parts. Give us a call at 606.286.4484. To learn more about NAPA AutoCare, visit www.NAPAAutoCare.com.

Verse of the Day

Who executes justice for the oppressed, Who gives food to the hungry. The Lord gives freedom to the prisoners. — Psalm 146:7